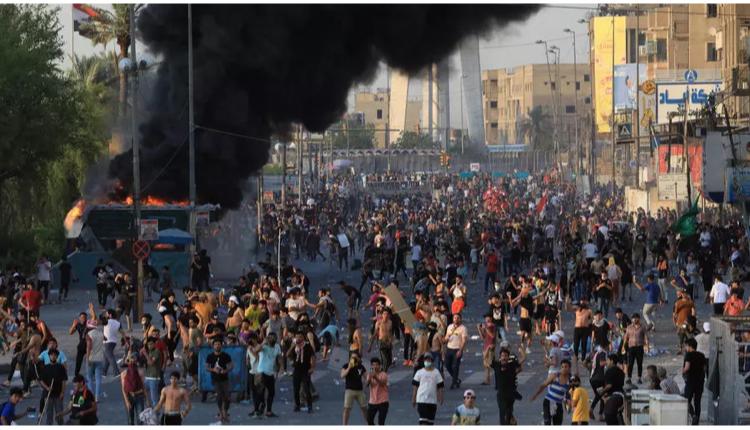 Iraq’s justice system freed a commander of the state-affiliated Hashed al-Shaabi paramilitary coalition on Wednesday, two weeks after he was arrested over the murder of a pro-democracy activist.

Qassem Muslah was arrested by police intelligence on suspicion of ordering the May 9 killing of Ihab al-Wazni, who was shot dead by men on motorbikes using a silencer. The paramilitary leader was welcomed by pro-Iran Hashed-al-Shaabi colleagues in the Shiite holy city of Karbala following his release, AFP journalists said. “The judges have served justice, they have ended their investigation, terminating it with my release,” Muslah said. But an official government source decried the decision to release Muslah. “The government presented all available evidence, but the judges have decided to release him because of pressure exerted on them,” said the source, who wished to remain anonymous.

In the wake of Muslah’s arrest, security forces had barred entry to Baghdad’s high-security Green Zone — home to the US embassy, parliament and the premier’s office — after the Hashed quickly deployed armed men and armoured vehicles in a show of force. Muslah is also suspected of ordering the assassination of another activist, Fahim al-Taie, in December 2019. “Telephone communications on the topic of these assassinations between Muslah and the direct perpetrators, threats to relatives, witness testimony, explanations received under questioning — all (these things) were supplied” to the judges, the government source added.

The evidence implicated Muslah in the assassination of both Wazni and Taie, the source said. In the same city where supporters of Wazni had last month gathered around his coffin shouting “Iran out!”, Muslah was Wednesday greeted as a hero. “Qassem has returned victorious!” proclaimed banners brandished by supporters who threw sweets in the air. “This is one more victory for the Hashed against those who target it here and abroad,” said Saad al-Saadi, a Hashed official in Karbala. Pro-democracy activists are often portrayed as foreign stooges by Iraq’s powerful pro-Iran factions.