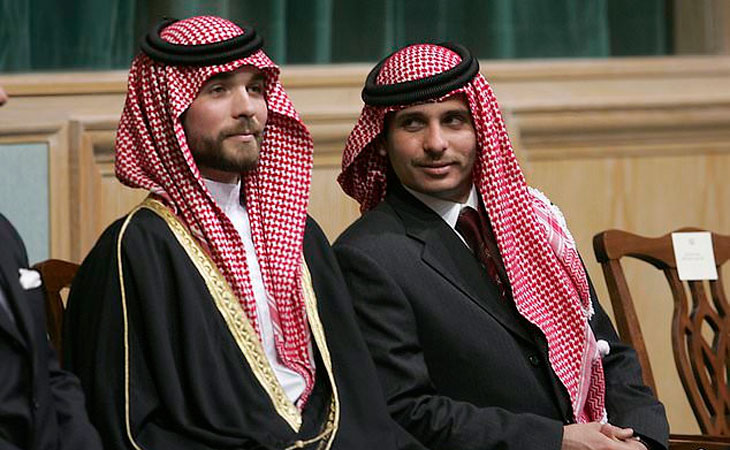 It appears to capture the explosive meeting between Prince Hamzah and the army chief of staff that triggered a rare public rift in the highest echelons of the royal family. It also points to deep tensions between the prince and the security apparatus that could cause more headaches for King Abdullah II, his half-brother.

The recording, purportedly made Saturday, circulated shortly after the palace and a mediator close to Prince Hamzah said that the royal family was in the process of resolving the crisis. Hours after the recording surfaced, Jordan announced a ban on the publication of any details related to the incident.

It appears to be a surreptitious recording of the meeting between Hamzah and Gen. Yousef Huneiti, the military chief of staff, who came to the prince’s palace Saturday to inform him that he was being placed under a form of house arrest. In the recording, the army chief says the prince is being punished because of meetings he had with individuals who “started talking more than they should.”

The prince raises his voice in anger, accusing the general of threatening him and saying he has no right to issue orders to a member of the royal family.

Huneiti, speaking in a calm voice, denies threatening him and says he is simply delivering a message from the heads of intelligence and general security. But by then, Hamzah is shouting over him. ” Get in your car, sir!” Neither man mentions the king.

The recording appeared authentic and is consistent with the prince’s earlier description of the encounter. It was unclear how it would affect the royal family’s mediation efforts. There was no word on the status of the prince or those who were arrested.

On the day after their meeting, Foreign Minister Ayman Safadi announced that authorities had arrested more than a dozen people and foiled a foreign plot, without saying which country was involved. But there is no reference to any such conspiracy in the recording. Hamzah, in a video statement released late Saturday, denied being part of any plot and lashed out at authorities for what he said was years of corruption and incompetence. He said they were trying to silence him because of his criticism.

Abdullah and Hamzah are both sons of King Hussein, who remains a beloved figure two decades after his death. Upon ascending to the throne in 1999, Abdullah named Hamzah as crown prince, only to revoke the title five years later and give it to his oldest son.

While Abdullah and Hamzah are said to have good relations generally, Hamzah has at times spoken out against government policies, and more recently had forged ties with powerful tribal leaders in a move seen as a threat to the king.

Jordan, which borders Israel, the occupied West Bank, Syria, Iraq and Saudi Arabia, has long been seen as a bastion of stability in a turbulent region. But the coronavirus pandemic has battered its economy, and it hosts hundreds of thousands of refugees.

Jordanian analyst Amer Sabaileh, speaking before the ban was imposed, said the dispute “puts more pressure on the king” to reform the system. “The mistakes that the prince highlighted should be tackled differently.”

He said the feud had also divided Jordanians, with many on social media expressing support for Hamzah. “We don´t need a split in society, even on an emotional level,” Sabaileh said. “He (the king) needs to go for fast action that saves the image of the family and the monarchy and the unity of society.”