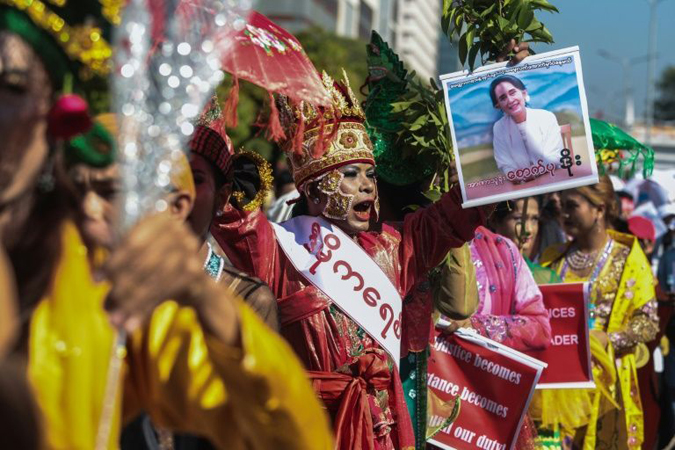 Otherworldly forces are displeased with the generals behind Myanmar’s coup, according to the ornately dressed spirit mediums joining street protests to denounce the country’s sudden turn back to army rule.

A group of the clairvoyants this week marched alongside civil servants, garment factory workers and students in the commercial capital Yangon to call for the release of ousted leader Aung San Suu Kyi.

They channel the 37 great “nats” — or deities — venerated in Myanmar, a Buddhist-majority country where animist worship and superstitious beliefs are part of everyday life for some.

It has become apparent to the mediums that the spirits are “unhappy” with the sudden end to Myanmar’s nascent democracy, the 48-year-old told AFP.

“Their withered faces show the hints of their dissatisfaction,” she added.

The presence of Achaintan Man Gay Oo and other mediums among anti-coup protesters may seem little more than a curiosity from outside the country.

But Myanmar’s military top brass have at times clamped down on spiritual practices led by popular soothsayers, mediums and sorcerers.

During the British colonial era and the half-century of junta rule that followed, the mediums channelled “weikza” — semi-divine Buddhist wizard-saints — to fight their oppressors.

Most of these sects were disbanded or pushed underground by the generals, even while reportedly paying heed to their own spiritual counsel.

Than Shwe, Myanmar’s feared former dictator, is rumoured to have been a regular client of a famous deaf mystic who also read the fortune of former Thai premier Thaksin Shinawatra.

One popular young sorcerer boasting a large following on Facebook was whisked away at night by police this week after participating in the Yangon protests.

Linn Nhyo Taryar had prayed for the fall of the new junta, his godfather and magic mentor Tin Htut told AFP.

‘Myanmar will have many changes’

“I do not like party politics or dictatorship… but I let my children do what they believe in,” Tin Htut said, angered that his protege was refused bail.

All videos posted by Linn Nhyo Taryar since the coup have been removed from Facebook.

But his followers say he might have foreseen the fall of Myanmar’s democracy, pointing at a prediction he had published on the last day of 2020.