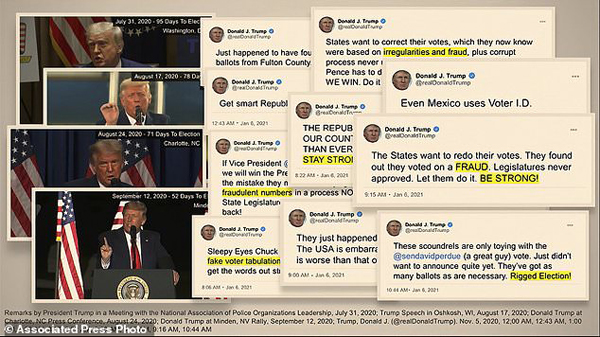 As the insurrectionists breached the U.S. Capitol, smashing windows and climbing in over the jagged glass, some of their first audible cries were a declaration of purpose: “Where are they counting the votes?”

The group encountered a single Capitol police officer who yelled: “Don´t do it. Don´t do it.”

“Where are they counting the (expletive) votes!” they hollered as they streamed inside, wielding wooden beams and a metal baseball bat, forcing the officer to retreat, according to footage shown this week at Donald Trump’s impeachment trial. Outside, others were setting up a makeshift gallows on the Capitol lawn for Trump´s own vice president, Mike Pence. The stunning and disturbing footage, some never seen publicly before, brought into clear focus how central the former president’s baseless 2020 election claims were to the rioters, and how determined they were to stop lawmakers inside the Capitol from certifying Joe Biden as president. In clip after clip, the insurrectionists called out for House Speaker Nancy Pelosi and Pence, who were overseeing the count of Electoral College votes when the riot began.

Democratic impeachment managers have shown video and audio from Jan. 6 dozens of times during the impeachment trial, often introducing and punctuating clips with an emphasis on how the rioters believed they were following Trump’s orders. They say the clips prove that without Trump´s attempt to overturn the election results, the Capitol riot would never have taken place.
The trial was continuing Friday with a presentation from Trump’s lawyers, who have decried the use of the video footage as unnecessary. They acknowledge the violence was as dramatic and illegal as Democrats say, but contend that Trump is not responsible and that he can no longer be impeached because he is out of office. The latter argument was rejected by the majority of the Senate, but is likely to appeal to Republican senators want to be seen as condemning the violence without convicting the president.

It’s counter to the Democrats’ emotive and visceral presentation. Among the clips the managers presented this week:
1. Crowds chanting “Hang Mike Pence!” Earlier that day, Trump had told a crowd, falsely, that the vice president could stop the certification of the Electoral College. “Mike Pence, I hope you´re going to stand up for the good of our Constitution and for the good of our country.”

2. A rioter searching for Pelosi, drawing out the first syllable of her name mockingly: “Oh, Nancy. Nancy. Where are you Nancy?”

3. Republican Sen. Mitt Romney of Utah running down a hallway, then turning around at the direction of Capitol Police Officer Eugene Goodman, who was hailed for his heroism in directing a mob away from the Senate chamber with senators inside.
4. A rioter later in the group picking up a phone and pretending: “Can I speak to Pelosi? Yeah, we´re coming (expletive).” “Oh, Mike Pence? We´re coming for you too (expletive) traitor.”

Quick thinking staffers grabbed the electoral college certificates, so the paperwork wasn’t there as the rioters rummaged through paperwork on the Senate floor, paging through lawmaker’s folders and taking photos.

At least 17 Republican senators would have to join Democrats for Trump to be convicted at the trial, which is considered unlikely. Only six Republicans voted with Democrats to advance the trial earlier this week, and conviction would require a two-thirds vote.

Some Republicans, including Romney and Alaska Sen. Lisa Murkowski, have told reporters how they were shocked by the footage at trial and indicated a willingness to convict Trump. But most of their GOP colleagues, while condemning the insurrection, have argued the trial is invalid because Trump has left office. Some also say Democrats haven’t proven that he incited the riot.

“To me, they´re losing credibility the longer they talk,” said Sen. James Inhofe of Oklahoma.