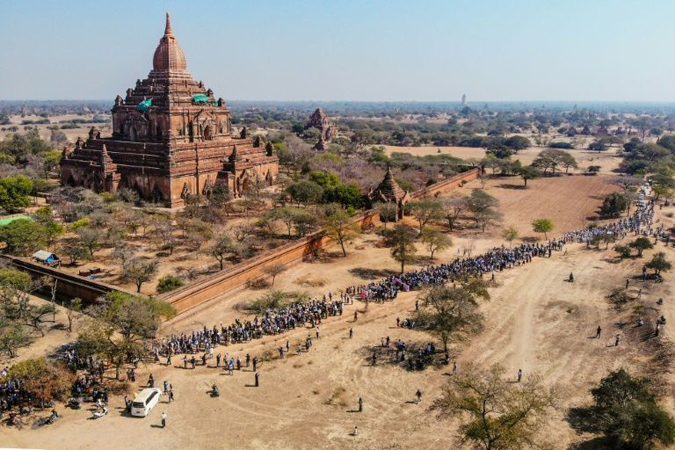 Huge crowds thronged cities around Myanmar to demand the return of ousted leader Aung San Suu Kyi on Friday for a seventh straight day of protests, after Washington announced sanctions on the generals behind last week’s coup.

A torrent of anger and defiance has brought hundreds of thousands of people out in nationwide rallies demanding the country’s generals relinquish power.

Demonstrations have so far largely been peaceful, but police fired rubber bullets on students while dispersing a sit-down protest in the city of Mawlamyine, arresting at least five.

With teachers, bureaucrats and air traffic controllers among the government employees walking off the job to demand an end to junta rule, the country’s new military leader Min Aung Hlaing told striking workers to return to their offices.

“Those who are away from their duties are requested to return to their duties immediately for the interests of the country and people without focusing on the emotion,” he said, in a speech reported by state media.

The new US sanctions target Min Aung Hlaing and other top generals, after President Joe Biden announced his administration was cutting off the military’s access to $1 billion in funds.

Ahead of another day of mass rallies, state media announced the release of more than 23,000 inmates as part of a prison amnesty.

Friday was a public holiday in Myanmar and mass pardons to empty the country’s overcrowded prison system are common on significant local dates.

More than 260 people have been detained in the days since the coup and about 20 released, according to the Assistance Association for Political Prisoners monitoring group. But there was no indication that Suu Kyi or any of her allies were among those set to be freed. “There is a serious concern that the sudden release… is to clear space for the detention of political prisoners,” the AAPP said. agencies