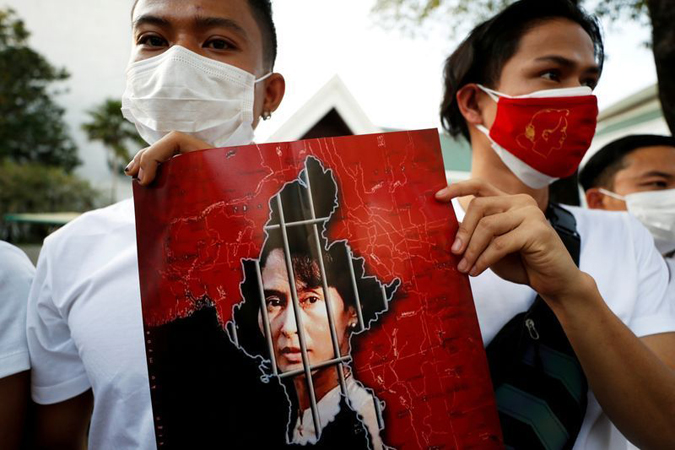 A statement from the group said the army had put its own interests above a vulnerable population facing hardships during the coronavirus pandemic. The virus has killed more than 3,100 people in Myanmar, one of the highest tolls in Southeast Asia.

“We refuse to obey any order from the illegitimate military regime who demonstrated they do not have any regards for our poor patients,” said a statement from the protest group.

Four doctors confirmed they had stopped work, but did not want to be identified.

“I want the soldiers to go back to their dorms and that’s why we doctors are not going to hospitals,” one 29-year-old doctor in Yangon told Reuters. “I don’t have a time frame for how long I will keep on this strike. It depends on the situation.”

Reuters was unable to reach the government for comment on the doctors’ action.

The army seized power on Monday, cutting short an unsteady transition to democracy on the grounds of fraud in last November’s general election, which Suu Kyi’s National League for Democracy (NLD) won in a landslide.

The coup drew condemnation from the United States and other Western countries as the ruling generals detained Suu Kyi and dozens of other officials.

Consolditating its hold, the junta unveiled a new governing council including eight generals and headed by army chief General Min Aung Hlaing. It resembled the ruling appartus under previous juntas that had ruled Myanmar for nearly half a century until 2011.

Nobel Peace laureate Suu Kyi, 75, remains in detention despite international calls for her immediate release. An NLD official said he had learned she was under house arrest in the capital Naypyidaw and was in good health.

In the biggest public protest against the coup so far, people in the commercial hub of Yangon chanted “evil be gone” and banged on metal pots late on Tuesday in a traditional gesture to drive away evil or bad karma