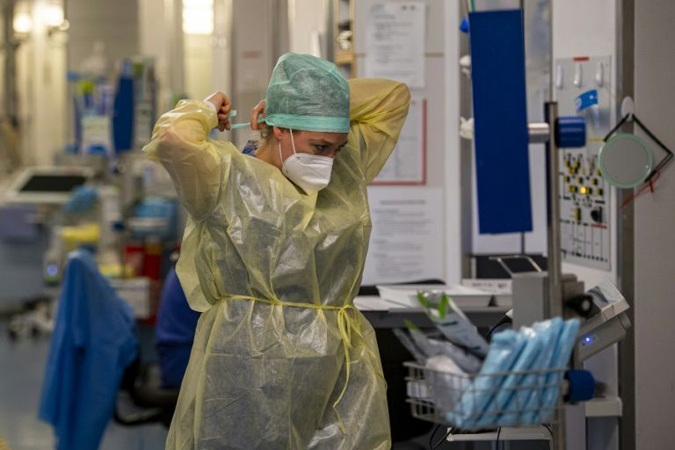 A year after Germany’s first Covid-19 patient was admitted to a Munich hospital, its exhausted doctors say the fight against the virus is far from over, despite a recent decline in cases.

“The situation is easing up a bit but our teams are tired and the virus hasn’t disappeared yet,” said Clemens Wendtner, a professor of infectious diseases at the Munich Clinic (MMHG). The MMHG’s hospital in Schwabing, northern Munich, treated Germany’s patient zero — an employee of the electromobility company Webasto who got infected at a training session led by a Chinese colleague. A year on, what was then an epidemic is today a raging pandemic that has claimed more than 57,000 lives in Germany alone and infected more than two million.

For Wendtner, it simply means: “It is far too early to ease restrictions. We have to remain disciplined.” At an intensive care unit in the nearby Rechts der Isar Hospital, it has been a rollercoaster ride. After an explosion in new cases before Christmas, the numbers are slowly starting to stabilise again. For the hospital, re-establishing a non-Covid zone after several weeks has felt like a small victory. A plexiglass screen in the corridor of the intensive care unit marks the dividing line between coronavirus patients and those with other ailments, a red stop sign warning staff not to proceed without protective equipment. “Now we can take in non-Covid patients again,” said doctor Markus Heim.

One in three will die

In December, amid a surge in the number of cases in Germany, the unit’s 21 beds were entirely given over to critical Covid-19 patients. “It was a very tense situation,” said Heim. Germany renewed restrictions in November, shutting down bars and restaurants as well as culture and leisure facilities.

Measures were tightened further in December, with schools and non-essential shops also ordered to close. The current shutdowns are set to last at least until mid-February. The state of Bavaria has gone further than the national measures, by also ordering a nightly curfew from 9 pm. Weeks into the restrictions, German leaders have cautiously voiced optimism as infection numbers are coming down.

There were 4,322 Covid patients in intensive care across the country on Monday, according to the DIVI emergency medicine association — down from around 5,700 in early January. Nevertheless, the situation remains critical for many. Late last month, three patients were being treated in Rechts der Isar Hospital’s Covid-19 section. One of them is a man in his forties, unconscious, hooked up to countless tubes and machines, under the constant watchful eye of medical staff. On his bedside table is a picture of his family, smiling.

His chances of survival are not much better than they would have been a year ago: according to Heim, about a third of Covid-19 patients brought to this unit will die.