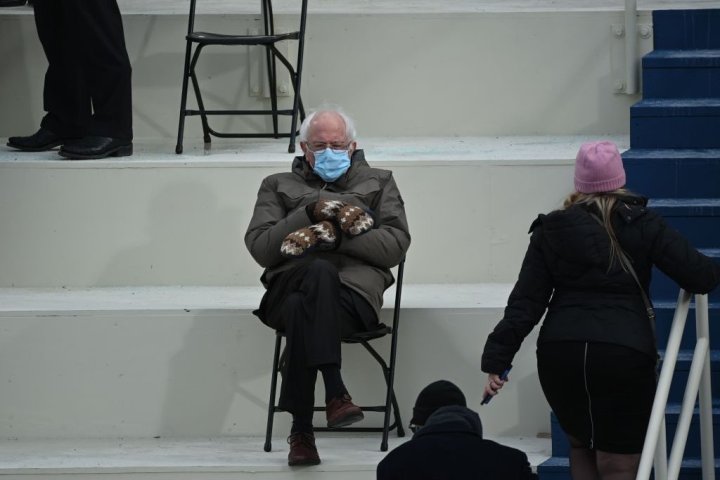 Social media users were feeling the “Bern” while Sen. Bernie Sanders was warding off the cold on Wednesday, when he wore a remarkably practical winter coat, mittens and a mask to U.S. President Joe Biden‘s inauguration.

The Vermont senator became the first mega-viral meme of the Biden era Wednesday afternoon after he was photographed with his legs and mittens crossed while sitting on a folding chair at the event.

The image had strong “Grandpa waiting for the Santa Claus parade during COVID-19” vibes, and it stood out at an otherwise glamorous ceremony involving ex-presidents, A-list singers and the most powerful politicians in Washington.

Social media users pounced on images of Sanders, adding captions or photoshopping him into a wide range of scenarios.

“This could’ve been an email,” one captioned image read, in a tweet that received more than one million likes.

“This could’ve been an email” pic.twitter.com/kn68z6eDhY

The tweet touched on Sanders’ battle with Biden last year for the Democratic presidential nomination — a battle he ultimately lost. Sanders later backed Biden and helped him develop his election platform, though it’d be hard to blame the senator if he did feel some mixed emotions on Biden’s big day.

Nevertheless, Sanders became the viral hit of the inauguration.

DID NO ONE OFFER YOU TEA BERNIE? AND YOU FROZEN WITH THE COLD?
COME IN FOR GOODNESS SAKE YOU’LL GET DOUBLE PNEUMONIA IN THAT. AND NO HAT ON YOUR HEAD. pic.twitter.com/tlDQg5D6pm

Bernie on the Cobbles. #Corrie pic.twitter.com/mp5Zwu0qp6

Others wondered why he carried a manila envelope with him at the inauguration.

Bernie dressed to stand on line at the post office. pic.twitter.com/tVgFQisnWy

Sanders has long enjoyed the support of young voters, many of whom are steeped in meme culture, so it’s no surprise to see him star in a meme (again).

The 79-year-old last captured viral fame approximately one year ago with a fundraising video, back when he was still running against Biden. “I am once again asking for your financial support,” he said, in a quote that was later remixed into new situations and memes.

He wore the same winter jacket on Wednesday that he sported in the viral video from a year ago.

BERNIE: what should i wear for the inauguration
WIFE: how about that jacket you wore for the meme
BERNIE: ok pic.twitter.com/NgJW0quBqU

“I am once again asking for a space heater.” https://t.co/2PmfOWFGYE

Sanders has also been wearing the mittens in cold weather for over a year, Buzzfeed reports. A Vermont teacher made them out of some old wool sweaters and lined them with fleece made from recycled plastic bottles.

“In Vermont, we dress warm,” Sanders told CBS News after the inauguration, when asked about his mitts. “We know something about the cold, and we’re not so concerned about good fashion,” he added.

“We want to keep warm and that’s what I did today.”