The 5-4 conservative majority bench ended with the passing of Justice Ruth Bader Ginsburg last month. Ginsburg was nominated by former president Bill Clinton in 1993 and was the leader of the liberal wing of the court.

If Barrett, whose Senate judiciary committee confirmation hearing kicked off Monday, fills Ginsburg’s seat, then there will be six conservative justices, three of them appointed by Trump.

Such an ideological shift could be felt in American life for decades, with the court playing a pivotal role in social policy and many other matters. For example, the court in 1973 legalized abortion nationwide and in 2015 legalized gay marriage nationwide.

As a devout Roman Catholic, Barrett has conservative positions on key hot-button issues including abortion and gun rights.

While a law professor at the University of Notre Dame, a Catholic institution in Indiana, Barrett in 2006 signed on to an advertisement in an Indiana newspaper calling for Roe v. Wade to be overturned.

“It’s time to put an end to the barbaric legacy of Roe v. Wade and restore law that protects the lives of unborn children,” the advertisement, purchased by an anti-abortion organization called St. Joseph County Right to Life, stated.

Trump in 2016 promised to appoint justices who would overturn Roe v. Wade.

Here is a look at who is currently on the Supreme Court.

Gorsuch served in former president George W. Bush’s Department of Justice for two years before he was appointed to an appeals court seat. There he defended religious freedom and advocated for court review of government regulations.

Kavanaugh, 55, was nominated by Trump and was sworn in as a Supreme Court justice in 2018. By a vote of 50-48, the deeply-divided Senate gave the lifetime job to Kavanaugh after weeks of fierce debate over sexual abuse allegations.

Roberts, 65, was appointed by Bush in 2005, who nominated him as chief justice. He took his seat Sept. 29, 2005, after a 78-22 vote in the Senate approving his nomination. Roberts is widely seen as a key swing vote on the court as he is closest to the centre on many issues. 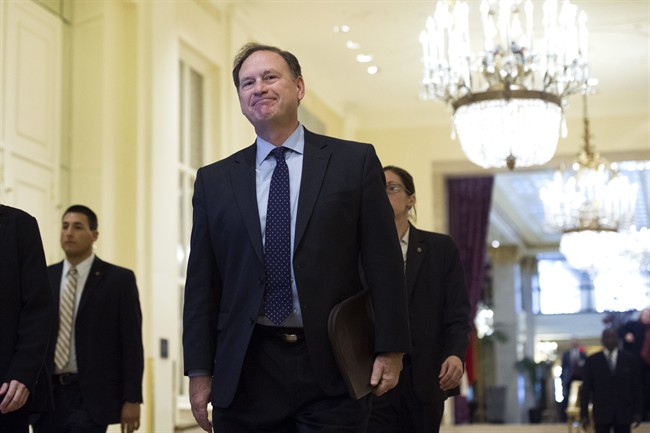 He is one of the court’s most conservative members.

Thomas replaced the first African-American justice on the Supreme Court — Thurgood Marshall — and remains the only black justice.

He was accused of having sexually harassed attorney Anita Hill while he was assistant secretary of the Department of Education and chairman of the Equal Employment Opportunity Commission.

She was briefly U.S. solicitor general before being nominated by Obama.

Sotomayor is the first Hispanic justice and is a former prosecutor and trial judge.

He spent time on the First Circuit Court of Appeals and was considered for a Supreme Court nomination in 1991 but Clinton nominated Ginsburg instead. Clinton went back to Breyer when a spot came up in 1994.

— With files from Reuters and the Associated Press