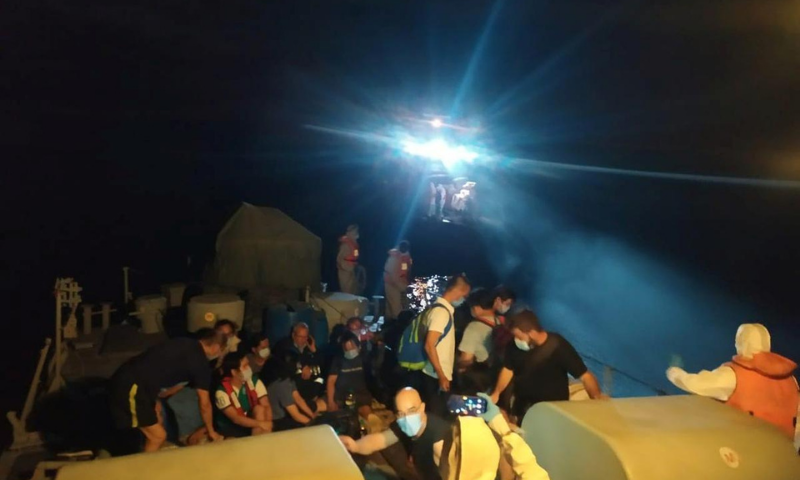 COLOMBO: A fire-stricken oil tanker was pushed further away from Sri Lanka’s coast and into deeper waters on Saturday, rescuers said, after successfully containing the blaze during a 36-hour operation.

The Panamanian-registered New Diamond carrying 270,000 tonnes of crude had drifted dangerously close to the eastern shores of Sri Lanka since issuing a distress message on Thursday morning.

The Indian Coast Guard and the Sri Lankan navy said the 330 metre (1,000 foot) vessel was towed overnight to deeper waters some 75 kilometres (46 miles) away from the coast.

“There is no oil slick reported,” the Indian Coast Guard said as a joint effort by the two countries to prevent the tanker drifting closer to the island continued.

Sri Lankan navy officials said three powerful tug boats had been deployed to keep the rudderless craft in position to ensure there was no threat to the island’s coast.

Apart from the Sri Lankan and Indian shores, the nearest landmass to the crippled New Diamond was nearly 1,500 kilometres (937 miles) to the east at Banda Aceh in Indonesia.

Sri Lankan President Gotabaya Rajapaksa tweeted his thanks to the Indian and Sri Lankan forces for their “contribution in conserving marine biodiversity by preventing a disastrous situation out in the ocean.”

The country’s navy said rescuers were still spraying foam on the vessel but that the blaze had been brought under control.

“The Indian coastguard as well as we have boarded the tanker to carry out a preliminary evaluation,” Sri Lankan navy spokesman Captain Indika de Silva said. “There is no immediate danger of the ship breaking up.” However, the Indian Coast Guard reported observing a two metre (six feet) crack in the hull 10 metres (32 feet) above the waterline, but that was not considered a catastrophic structural failure.

The fire was triggered by an engine room explosion that killed a Filipino crewman on Thursday morning as the vessel was passing Sri Lanka on its way to the Indian port of Paradip.

Three tugboats — two Indian and one chartered by the owners — were brought into action on Friday night to push the vessel back into deeper waters amid fears of an environmental disaster should the oil leak.

A total of 16 vessels, including specialised firefighting tugs and four aircraft, were deployed to bring the blaze under control by Friday night.

Sri Lanka’s Marine Environment Protection Agency said legal action could be taken against the owners, Liberian-registered Porto Emporios Shipping Inc “should the worst happen and the ship breaks up”.

Sri Lankan officials said they were considering a ship-to-ship transfer of the crude before salvaging the tanker.

The vessel is larger than the Japanese bulk carrier MV Wakashio, which crashed into a reef in Mauritius in July leaking more than 1,000 tonnes of oil into the island nation’s pristine waters.

The Maldives, which neighbours Sri Lanka, has raised concerns that any oil spill from the New Diamond could cause serious environmental damage in the atoll of more than 1,000 coral islands that is heavily dependent on tourism and fishing.