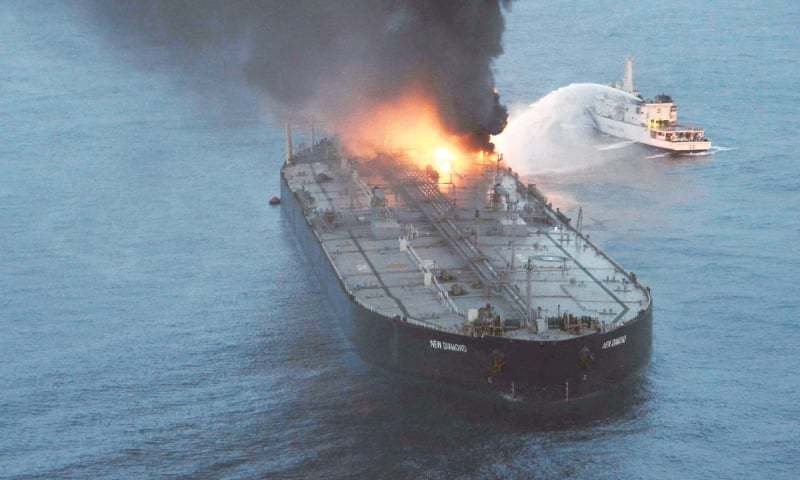 COLOMBO: A Panamanian-registered oil tanker burned out of control for a second day off Sri Lanka on Friday, raising fears of a major new oil spill in the Indian Ocean.

Just a week after a huge oil slick hit the Mauritian coast, Sri Lankan authorities are preparing for the worst as the navy warned it could take five days to put out the blaze on the 330-metre-long New Diamond.

The ship was carrying 270,000 tonnes of crude from Kuwait to India when the engine room exploded on Thursday, killing one Filipino crewmember. The other 22 crewmembers — five Greek and 17 Filipino — were taken off the vessel.

The Sri Lankan navy said there was no immediate danger of the tanker breaking up, despite reports of a two-metre crack in the hull above the water line.

Rear Admiral Y.N. Jayaratne said the metal had cracked in the intense heat as the fuel tanks burned when the fire spread from the adjoining engine room.

The fire has not yet touched the crude however.

“It will take another four to five days to completely put out the fire,” Jayaratne said. “Thereafter we should be able to tow it away and let the owners decide what they want to do.”

The ship was heading for the eastern Indian port of Paradip when it issued a distress signal 60 kilometres from Sri Lanka’s east coast.

On Friday, the stricken vessel had drifted 25 kilometres closer to the shore, Sri Lankan officials said adding that it was now being pushed back.

India and Sri Lanka have deployed reconnaissance planes to track the ship.

Sri Lanka’s Disaster Management Centre said there was no immediate danger of an environmental disaster.

“It is not as bad as it seems,” DMC head Sudantha Ranasinghe said. “Once the fire is put out, the vessel will be towed further away into deeper waters.”

But the head of Sri Lanka’s Marine Environment Protection Agency (MEPA) Dharshani Lahandapura said legal action could be taken against the owners, Liberian-registered Porto Emporios Shipping Inc “should the worst happen and the ship breaks up”. Lahandapura told reporters that Sri Lanka did not have the resources to contain a major oil spill. But Ranasinghe said authorities were considering a ship-to-ship transfer of the crude before salvaging the tanker.

Sri Lanka’s neighbour Maldives has raised concerns that any oil spill from the New Diamond could cause serious environmental damage in the atoll of 1,192 coral islands that depends on fisheries and tourism.

Maldivian minister at the president’s office, Ahmed Naseem, called for precautionary measures across the archipelago that is about 1,000 kilometres southwest of Sri Lanka.