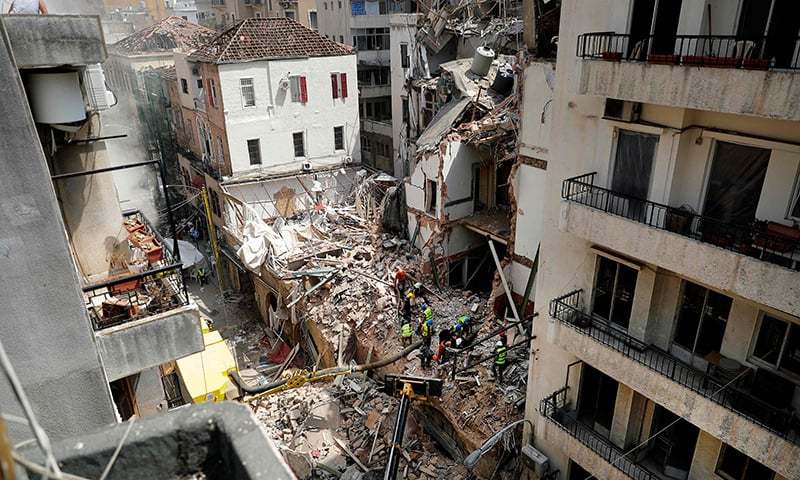 Rescue workers dug through the rubble of a Beirut building for a second day on Friday, hoping to find someone alive more than a month after it was destroyed by a huge port explosion that shattered the Lebanese capital.

Rescuers said on Thursday that sensors had detected signs of a pulse and breathing under the debris of the building in the Gemmayze district. Mechanical diggers lifted chunks of concrete and masonry as workers used shovels and their hands to dig down.

Gemmayze and the neighbouring Mar Mikhael district were among the areas hardest hit by the August 4 explosion at the nearby port, which was caused by massive amounts of badly stored ammonium nitrate.

The blast killed about 190 people and injured 6,000, in a nation already crippled by economic crisis.

Rescue workers said there may also be a dead body under the rubble of the building.

“The machine is saying that there is one alive, a heartbeat, and the dog is marking a dead body … This is the theory. Now we are searching to make sure,” said Mansour Al Asmar, a Lebanese volunteer rescue worker at the scene.

A mechanical digger pulled steel girders and other heavy debris from the ruins.

Residents gathered nearby, hoping someone could be found, while some said the government had not done enough to help.

President Michel Aoun followed up on the operation in a phone call with the head of the civil defence, the presidency said.

Near the site, Mohamed Houry, 65, said he hoped someone was found alive but, even if only bodies were uncovered, “it’s important their families can find peace.”

The explosion ripped through a swathe of the capital, shattering districts such as Gemmayze, home to many old, traditional buildings, some of which crumbled in the shockwave.

Rescuers, including volunteers from Chile, used scanning equipment to create 3D images of the wreckage to try to locate anyone alive, local television images showed.

The building being searched once housed a bar on its ground floor.

Lebanon’s army called for one minute’s silence at 6:07pm (1507 GMT) on Friday to mark a month since the blast.